The Enid Fire Department brings you these Fire Safety Tips for Computers with the hope that they might prevent loss of life or property. 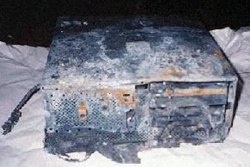 Here is an example of a fire damaged system. The particular system pictured below was the source of a structure fire. The computer was inadvertently left on after the family retired for the night. Amazingly, all of the data from this computer was recovered with no losses by a professional data recovery service.

Note the condition of the floppy drives and remnants of the faceplate, as well as the overall condition of the case. A corner of the hard disk is visible through the rectangular opening at top center of the front sub-panel.

Inside, card guides were lying in solidified puddles at the bottom of the case. Circuit boards were charred, wires were melted or burned, and metal parts were warped and twisted. The hard disk's I/O connectors were melted and its circuit board charred. Traces of melted solder were also found at several places on the hard drive's circuit board, some of which had dripped across the surface of the board and collected at the edge of the drive's frame.

The residence suffered fire damage confined to the room of origin and smoke damage throughout the rest of the home. An installed smoke detector alerted the family and prevented the loss of life. 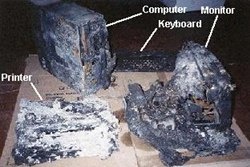 Monitor: The color monitor, which was located on top of the computer, was the source of the fire. The fire appeared to have started in the high-voltage fly-back circuit located at the rear of the monitor.

Printer: The printer was the least recognizable component of the system. It could best be described as two rods and a dot-matrix print head embedded in a pile of charred plastic.

Keyboard: The keyboard was somewhat sheltered by a keyboard shelf, still its plastic was melted by hot gasses

Mouse (Not Shown): No trace of the mouse could be found among the ashes. However, its serial port connector and several inches of wire verified its existence.