Monuments to Enid's aviation pioneers are many, and the one that most exemplifies the pioneer spirit is the memorial to Lt. I. A. (Bert) Woodring.

Woodring was a test pilot for the United States government in the late 1920s and early 1930 before he died while testing a new aircraft. 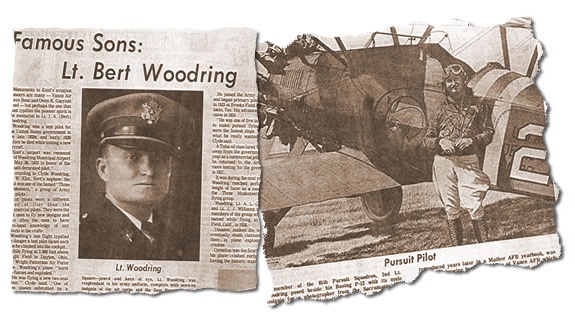 Lieutenant I. A. Woodring, who for many years lived in Enid, was killed in an airplane accident at Dayton, Ohio. Word of his death came to Enid over the Associated Press wires.

Enid's Airport was renamed Enid Woodring Municipal Airport on May 30, 1933 in order of the "much decorated pilot."

First Municipal in State
Enid was the first city of Oklahoma to vote bonds for a municipality owned airport. The issue carried by a three-to-one majority. The airport has railroad trackage, is on a pave highway, has electric power facilities and other conveniences essential to the establishment of an airplane factory.